You are here: Home / Snapshots of Republic Street

In 1888 the 26-year-old American novelist Edith Wharton visited Malta as part of a Mediterranean cruise. Her expectations were somewhat dashed, as her record in The Cruise of the Vanadis (2003) suggests:

The Strada Reale … with its Opera house, its hotels and photograph shops, is provokingly British and modern; one has to wander into the side streets for picturesque effects. The people are dressed in everyday European clothes, and in fact the reign of the prosaic has settled down upon Malta. As to the Street of the Knights, it filled me with an unreasonable disappointment. I had forgotten that the famous Auberges were probably not built until the end of the 16th or the beginning of the 17th century, and was needlessly aggrieved by their florid, late Renaissance façades, without beauty of detail or dignity of general effect.

What does this historical snapshot into Republic Street say about Maltese society then and now?

The name of ‘Republic Street’ 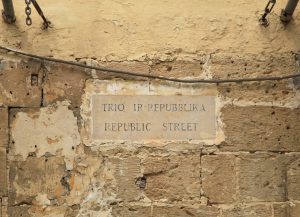 Where the Streets Have Four Names (Times of Malta, 2015)

Activity: Discuss how the different names of Republic Street relate to the evolution of the democratic process in Malta?