You are here: Home / The Sette Giugno Uprising

The report of the inquiring commission then proceeded to state that a shot was heard from the direction of a window of the Cassar Torreggiani house. At face value, this gives the impression that the Maltese were the first to shoot during the uprising. At that moment, as eyewitnesses reported, one of the soldiers shot a round into the crowd, with the rest of the troop following. The first victim of the uprising, Manwel Attard, fell in front of the Cassar Torregiani house. Other individuals were injured. Ġużè Bajada was hit near Old Theatre street, and fell on top of the Maltese flag he was carrying. The officer in charge began shouting for the firing to cease. Meanwhile, in the Chronicle offices, Lieutenant Shields ordered his men outside, since there was an evident smell of gas in the building. Shields feared making the soldiers exit the office one by one, since the crowd outside would certainly attack them; on the other hand, they could not remain inside. To clear a way out, Shields ordered a soldier to shoot low, away from the crowd. This shot hit Lorenzo Dyer, who tried to run away. Since the injury was serious, he was lifted by the crowd and carried to Palace square. During this initial uprising, three died and fifty were injured. 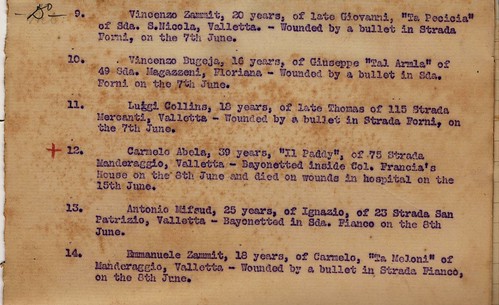 List of persons that were wounded or killed during the riots of the 7th and 8th June 1919 (detail, part 1/3). Other images in this series are available from National Archves of Malta, used with kind permission.

Newspaper clipping of the time, linked from Maltese History and Heritage

The proceedings in the National Assembly were interrupted as persons injured in the streets were brought inside. Some of the delegates left the buildings, while others ran to the balcony. The Assembly passed a quick motion in order to have a resolution to present to the Imperial government. Count Alfredo Caruana Gatto then addressed the crowds, asking them to restrain themselves from further violence. The Assembly then sent a delegation to the Lieutenant Governor, asking for the troops to be removed for the crowds to retreat. The Governor accepted, and Caruana Gatto addressed the crowd again, which complied and began to fall back.

The day after the attack, censorship was reinstated for political articles. In the morning, flowers and other tributes were placed in the streets where the victims had died. The deaths and injuries of so many people did not halt the uprisings. Another group attacked the flour mills owned by Cassar Torreggiani in Marsa, while other trading houses were raided in the outlying villages.

Substantial parts of this text have been drawn from Maltese History and Heritage, a project by Vassalomalta.com. Usage permission TBC.