You are here: Home / Guide to using Aurasma 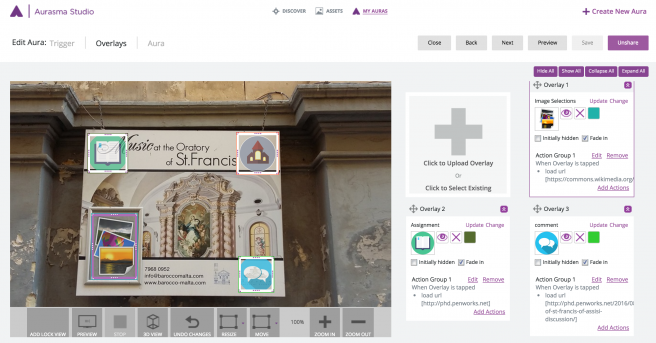 This post is aimed at those wishing to use Aurasma to create an augmented reality interactive experience. It also includes information on how to make a geofenced experience, and other useful info and links on using Aurasma.

From the Aurasma Wikipedia entry: “Aurasma is HP Autonomy’s augmented reality platform. It is available as an SDK or as a free app for iOS and Android mobile devices. Aurasma’s image recognition technology uses a smartphone’s or tablet’s camera to recognize real world images and then overlay media on top of them in the form of animations, videos, 3D models and web pages.”

Using Aurasma, a free app, you can create augmented reality interactive experiences. They can be simple, using one static image to trigger a video or audio file, or they can be very sophisticated, overlaying complex 3D virtual spaces onto real world locations. A simple google search of ‘aurasma in education’ or similar will turn up a lot of blog posts by teachers and others on how they are using it. Aurasma is not only a mobile app, it also has a web based Aurasma studio facility, in which you can create more sophisticated Auras. I recommend you create Auras using this, not just using the mobile version, as you have more control.

The principal is simple – using a combination of the mobile app camera and attaching behaviours to ‘trigger images’, users see can ‘virtual items’ placed in an augmented real space. These virtual items (think icon with attached function) can be clicked to access further content like video, web pages, social media or discussion threads. They are not difficult to make, however it’s up to you how complex you make each Aura, which is what an Aurasma experience is known as.

The steps to make an Aura using Aurasma Studio, which can be viewed by you and others are:

It is possible to make an Aurasma Aura only accessible by actually being physically present at a specific GPS location which has been assigned to the Aura. GPS Auras also are visible on the Aurasma aura map if they are set to ‘Public Aura’.

Using 3D with Aurasma is more complicated and probably for developers only. 3D works by importing a file of an already created 3D environment using 3D software, and superimposing it on a real world space.

If you want to explore this further I recommend reading the full article on the Macquarie University education wiki:

Aurasma also have some good notes on creating Auras and using channels and location: