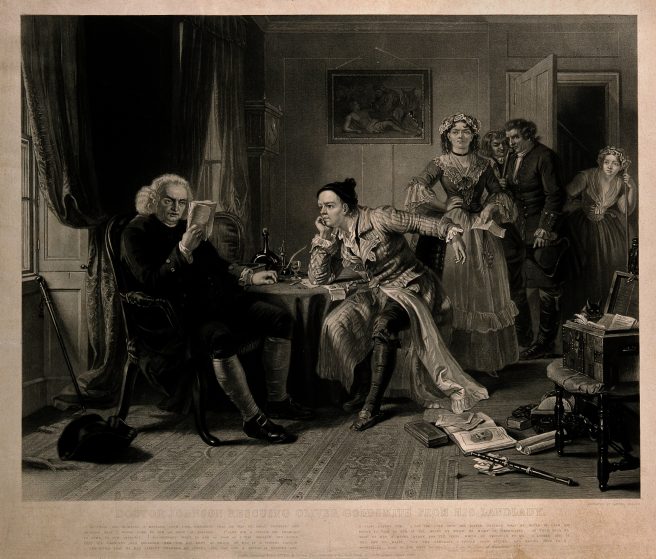 This post is intended for use with the Literary London walking tour and smart learning activities.

Continue west along Fleet Street until you reach the sign of the Old Cheshire Cheese, and then turn right up along Wine Office Court, take the left-hand fork until you reach Gough Square and Dr Johnson’s House at the western end. Just into the square is a bronze statue of his beloved cat, Hodge. The statue shows the cat sitting on top of Johnson’s famous dictionary and a couple of oyster shells to the side. Hodge was very partial to these treats. He was, Johnson said, ‘a very fine cat indeed.’

Dr Johnson’s House is one of the area’s few surviving eighteenth century houses and the only one of his eighteen residences in the City to survive. Samuel Johnson lived here from 1748-59 as he compiled his famous A Dictionary of the English Language. It was the first comprehensive English dictionary ever published (1775) and became the basis for all subsequent dictionaries. It was also notable for its literary quotations that illustrated the meaning of words. James Boswell, his friend and biographer, described the scene on the top floor where Johnson worked on his dictionary as resembling ‘a counting house,’ as the six copyists were busying themselves transcribing the entries of the dictionary. It took nine years to complete and has been described as ‘one of the greatest single achievements of scholarship and probably the greatest ever performed by one individual who laboured under anything like the disadvantages in a comparable length of time.’

Johnson was also a prolific journalist and opinion-former. He wrote a number of news journals over several years and established himself as an arbiter of literary and cultural taste.

Johnson left his estate to his servant Francis Barber, who was born a slave in Jamaica. Barber is often mentioned in Boswell’s Life of Johnson. A plaque on the front railings of the house commemorating Barber was placed there by the historian David Olusoga as part of his BBC series Black and British: A Forgotten History.

Adam Gopnik’s piece in The New Yorker (2008) is an engaging and informative read on Samuel’s character. Well worth a read!

“To be regarded in his own age as a classic, and in ours as a companion!” Thomas Macaulay wrote half a century after Johnson’s death. “Those peculiarities of manner, and that careless table-talk, the memory of which, he probably thought, would die with him, are likely to be remembered as long as the English language is spoken in any quarter of the globe.” Boswell’s Johnson is, in some sense, the first recorded modern personality, whose character is reflected in habits and tics and addictions, in the minutiae of a literary life—his cat Hodge, his orange peels, his unintentional sideways sallies—as much as in neatly set virtues and vices.  Adam Gopnik’s “Man of Fetters, from The New Yorker, 2008.

Johnson would be at home today, as he is a pioneer of what we now know as the meme. Examples of his quotes:

Also a poet, his work may be worth investigating, for example at https://www.poetryfoundation.org/poets/samuel-johnson

Aspects of this place to think about

How used are we to having reference works like dictionaries and encyclopedia at our disposal? How do you think the internet will change the nature of literature – production, distribution and reception?

Content available at the location, about the  place or area

Investigate all the other icons on the Aurasma augmented trigger, use the icons guide to find out what is available.

This guide is accessed via the layers icon in the bottom left of any trigger using a similar icon to this one:

Remember to focus on the trigger image using the Aurasma camera, centering the image to be as similar to what you see on the map as you can. The Aurasma camera provides small watermarks at each corner of its camera view to help guide your focus.

Now the walk is over retire to the Cheshire Cheese and discover its many rooms and sawdust covered floors and enjoy a pint of ale and a pie.

Image by Samuel Bellin [CC BY 4.0], via Wikimedia Commons