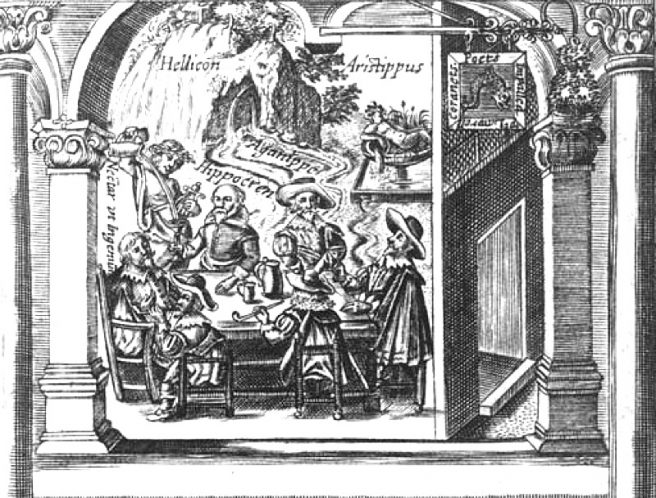 This post is intended for use with the Literary London walking tour and smart learning activities.

As you walk from London Stone through the Bloomberg building towards Watling Street you are tracing the path of a major Roman thoroughfare and the route you’re taking has been part of the city’s space for two thousand years. Approaching St Paul’s, stop by Ye Olde Watling Pub and learn about the literary connections to another tavern that was once nearby.

The corner of Bread St and Friday Street [no longer there] marked the location of the former Mermaid Tavern. This was the meeting place of the ‘Fraternity of Sireniacal Gentlemen,’ inc. Ben Jonson, John Donne, the dramatists John Fletcher and Francis Beaumont, travel writer Thomas Coryat, translator Richard Carew, and William Strachey, reporter on the English colonization of Virginia and perhaps the imaginative source of the island and shipwreck in The Tempest. Whether Shakespeare drank here is unknown but his association with the sireniacal gentlemen is clear.

Large theatres did not exist inside the city walls as the risk of rousing the mob’s anger with the violent spectacle and passion of a play was not one the authorities could take. The Globe housed 3000 people but was located safely over the river in Bankside where other dangerous institutions like brothels and prisons were also placed. Theatrical companies could not exist without aristocratic patronage and plays could not be performed without the agreement of the censor, The Master of the Revels. The Lord Chamberlain’s office of censorship was not abolished until 1968.

‘Digestive cheese and fruit there sure will be;
But that which most doth take my Muse and me,
Is a pure cup of rich Canary wine,
Which is the Mermaid’s now, but shall be mine;
Of which had Horace, or Anacreon tasted,
Their lives, as so their lines, till now had lasted.
Tobacco, nectar, or the Thespian spring,
Are all but Luther’s beer to this I sing.’

In February 1819, Keats composed Lines on the Mermaid Tavern:

‘Souls of poets dead and gone,
What Elysium have ye known,
Happy field or mossy cavern,
Choicer than the Mermaid Tavern?’

Aspects of this place to think about

Is it possible to conjure understanding of historic life from the buildings of Bread St or Watling Street? Do we have current places that compare to the Mermaid Tavern or is this culture of intellectual (drunken) discourse gone forever?

Content available at the location, about the  place or area

Investigate all the other icons on the Aurasma augmented trigger, use the icons guide to find out what is available.

This guide is accessed via the layers icon in the bottom left of any trigger using a similar icon to this one:

Remember to focus on the trigger image using the Aurasma camera, centering the image to be as similar to what you see on the map as you can. The Aurasma camera provides small watermarks at each corner of its camera view to help guide your focus.